“Republican or Democrat, I don’t care – just do your job,” says Tulsi Gabbard, a former Congresswoman who ran as a Democrat in the 2020 Presidential Election but later announced that she was leaving the party due to its anti-police and anti-religion rhetoric. Tulsi speaks widely on her opposition to “woke” medical authorities, her support of the 2nd Amendment, and how her former party is “now under the complete control of an elitist cabal of warmongers driven by cowardly wokeness.”

More about Tulsi Gabbard: Former Congresswoman and 2020 Presidential candidate, Tulsi Gabbard, is a combat veteran with deployments to the Middle East and Africa. She currently serves as a Lieutenant Colonel in the U.S. Army Reserves working as a Civil Affairs Officer.

Tulsi first served in elected office in the Hawaii State House of Representatives when she was 21 years old. Due to the attacks on 9/11, she enlisted in the Army National Guard. In 2004, she gave up an easy re-election campaign and volunteered to deploy to Iraq with the 29th Brigade Combat Team where she served in a medical unit.

After returning home in 2006, Tulsi worked in the U.S. Senate as a legislative aide to the late Senator Danny Akaka, who was Chairman of the Senate Veterans Affairs Committee. She then volunteered for a second Middle East deployment as a Platoon Leader.

Having experienced firsthand the true cost of war, Tulsi ran for United States Congress at age 31, vowing to honor the lives and sacrifice of her brothers and sisters in uniform. She prevailed in a difficult election and went on to serve in Congress for eight years as a member of the Armed Services, Homeland Security, and Foreign Affairs Committees. Foregoing a run for re-election to Congress, she ran as a Presidential candidate in the Democratic Party in 2020.

Using a proprietary base formulated by a pharmacist, Genucel has created skincare that can dramatically improve the appearance of facial redness and under-eye puffiness. Genucel uses clinical levels of botanical extracts in their cruelty-free, natural, made-in-the-USA line of products. Get 10% off with promo code DREW
10% off with code DREW
Visit Website
The CDC states that COVID-19 vaccines are safe, effective, and reduce your risk of severe illness. Hundreds of millions of people have received a COVID-19 vaccine, and serious adverse reactions are uncommon. You should always consult your personal physician before making any decisions about your health. 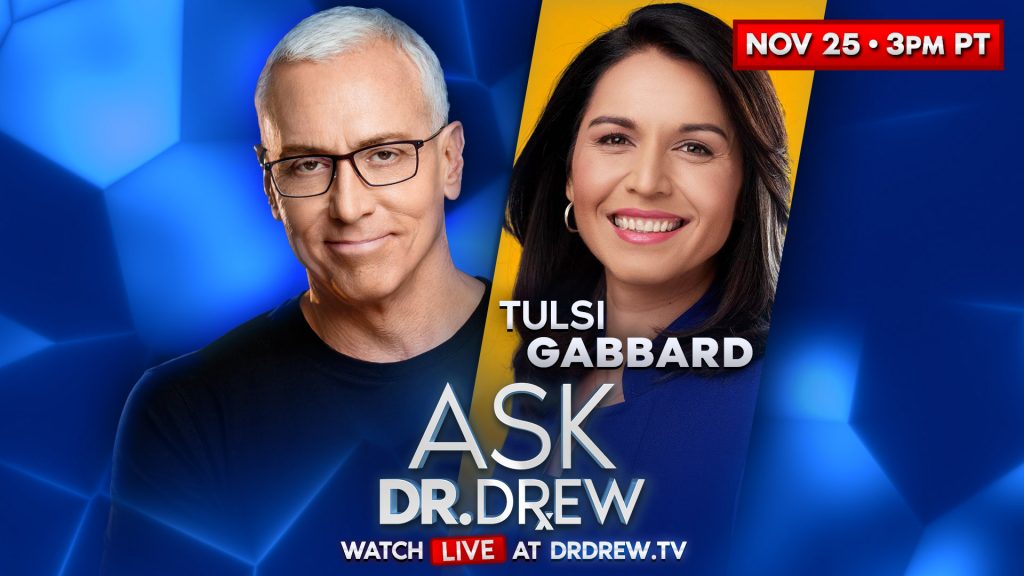