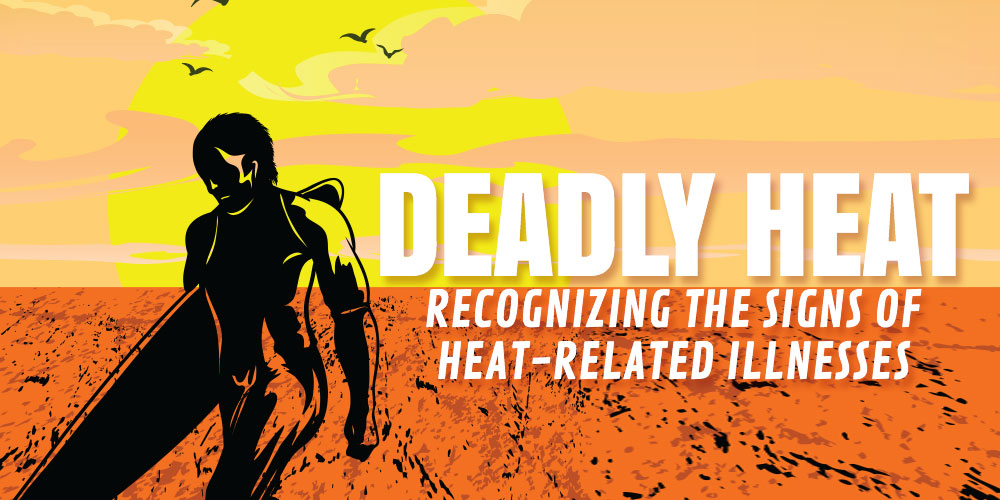 When temperatures increase during the hot summer months, the potential for heat-related injuries rises dramatically along with the mercury. Hot weather can cause adverse physical reactions that range from the minor and uncomfortable to the serious and life-threatening. Recognizing and responding to symptoms of heat-related illness may prevent the condition from worsening, and even be life-preserving. Body temperature is regulated by the nervous system, which uses a process called thermoregulation to keep it within the narrow margin of approximately ninety-eight and one hundred degrees Fahrenheit. When the core temperature rises above that, the hypothalamus will send signals to various parts of the body to trigger cooling mechanisms. These include sweating, which cools your skin as it evaporates, and vasodilation (a widening of the blood vessels), that encourages blood flow away from the deeper, warmer portions of the body, outward towards the skin, where it is cooler and can radiate away more effectively. Most of the time this system is quite efficient, but several conditions can occur if something goes awry.

Heat rash or “prickly heat,” is a skin irritation that is common in babies and appears in the form of pimples or blisters. The result of excessive sweating, heat rash occurs when sweat ducts become blocked or swollen. Mild discomfort or itching can accompany this condition, but it is usually resolved easily by keeping the effected area cool and dry and applying some baby powder. On the rare occasion, swelling, redness, swollen lymph nodes or a fever may indicate an infection that should be treated by a physician.

Tip: Don’t wipe the rash – allow it to air dry.

Heat cramps usually announce themselves by painful spasms in muscles that have been exerted. Generally occurring in the abdomen or the extremities, they are usually the result of an electrolyte deficiency. Excessive sweating depletes the body’s moisture and sodium reserves, which can lead to cramping. Having some water and a snack is usually enough to alleviate the discomfort. Medical attention is generally not required.

Tip: If the cramping doesn’t resolve fairly quickly, it may be a sign of a more serious heat-related illness.

Heat syncope is a fainting episode resulting from low blood pressure due to becoming overheated. Generally ascribed to dehydration or lack of acclimatization, it may be preceded by a feeling of dizziness or light-headedness. Heat causes blood vessels to expand (dilate) and then gravity takes over; bodily fluids are pulled down into the legs, which reduces blood flow to the brain and sometimes results in passing out. A fainting episode like this isn’t particularly dangerous, but injuries can result from the fall.

Tip: Medical attention is prudent if you suspect factors other than the heat have contributed to the fainting episode.

Heat exhaustion is yet another (more serious) response to high temperatures and dehydration. There are two types of heat exhaustion, though most people experience both. The first type is water depletion, which is indicated by thirst and headache. The second type is salt depletion, which comes along with nausea, vomiting and cramps. This is a more serious form of heat-related illness and should be carefully monitored until symptoms have completely subsided. If heat exhaustion occurs, steps should be taken immediately to cool down. Drinking fluids and seeking shade or a cooler environment are vital when it comes to helping the body regain its ability to regulate its core temperature.

Tip: Heat exhaustion can progress to heat stroke, which can be deadly. If you are feeling symptoms of heat exhaustion, take immediate action to treat it.

Heat stroke or hyperthermia is the most serious of the heat-related illnesses and is considered a medical emergency that requires immediate treatment (call 911). There are two types of heat stroke. The first is called classical heat stroke (CHS) and it occurs as the result of prolonged exposure to high temperatures. It is common among the elderly population and can build up over several days. The second type is exertional heat stroke (EHS) and it’s caused by excessive physical activity. This variation frequently affects athletes and its symptoms are immediate. Either type can be fatal with heat stroke resulting in two hundred and forty deaths annually in the United States. Heat stroke happens when the body is overwhelmed by heat and has lost its ability to regulate its temperature. A core temperature of 104 degrees Farenheit (or higher) is indicative of heat stroke and its symptoms include slurred speech, nausea, vomit, rapid breathing, increased heart rate, headache, muscle cramps, weakness, dark urine and flushed skin. If treatment is not administered immediately upon onset, heat stroke can damage the brain, kidneys and muscles. Death can occur. If you suspect heat stroke, introduce fluids like water or sports drinks (avoid alcohol, caffeine and soda), remove excess clothing and find a cooler environment. Cool the body by a taking a shower or using a hose, or apply ice packs to the neck, groin, back and armpits. Heat stroke can be diagnosed by blood and urine tests, assessment of muscle function and x-rays or other imaging techniques.

Rhabdomyolysis is an extremely dangerous condition that can be brought on by heat stroke. It is caused by the direct or indirect injury of a muscle that results in its rapid deterioration and death. When this happens, the muscle’s toxic intracellular contents leak directly into the bloodstream, which causes irregular rhythms and seizures and ultimately damages the kidneys. Heat stroke patients can recover completely if appropriate steps are taken swiftly upon recognizing its symptoms

Tip: Keep cars locked while not in use so that children cannot become trapped inside them.