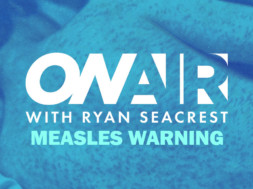 Multiple Los Angeles colleges have quarantined over 600 of their students and staff who may have been exposed to measles: the infectious disease long-believed to be eradicated by 2000. On Thursday, April 25, Dr. Drew joined Ryan Seacrest to discuss the measles outbreak and the steps that Los Angeles residents should take to keep their families safe.

From On Air With Ryan Seacrest: “Public health officials in Los Angeles have declared a measles outbreak, with more than five cases of the measles being investigated by the Los Angeles County Department of Public Health. Amid the scare, Dr. Drew phoned into On Air With Ryan Seacrest on Thursday, April 25, and warned everyone should check with their doctor on their vaccinations and more. So what should you do if you live in Los Angeles or have traveled recently?”