Home Topics Body And Health Tumors With Hair And Teeth: What Are Teratomas and Germ Cell Tumors? 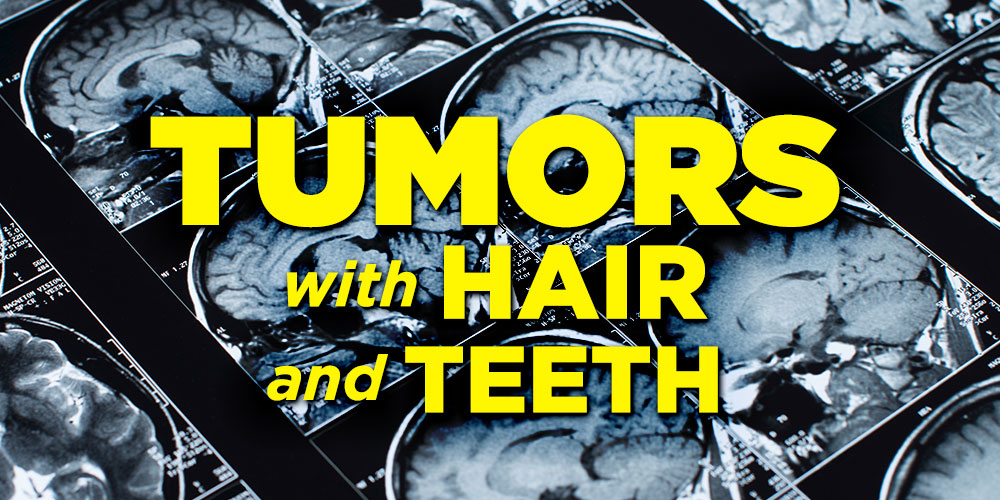 Tumors With Hair And Teeth: What Are Teratomas and Germ Cell Tumors?

Tumors With Hair And Teeth: What Are Teratomas and Germ Cell Tumors?

Teratomas are a type of tumor that, while peculiar in composition, are generally not malignant (cancerous). These growths, once removed, can consist of many types of tissue, and can include fully developed teeth and locks of hair! The word teratoma comes from the Greek “teras,” which means monster and “oma,” which means tumor. Oftentimes, these congenital tumors are found in the ovaries and testicles, having arisen from germ cells that went awry. Germ cells are are supposed to develop into gametes (aka, sperm and eggs), but can turn into other types of cells while in the early stages of human development. One physician has described this process as, “germ cells multiplying abnormally and differentiating into various different, normal tissues in abnormal places.” Teratomas can remain undetected until later in life, and may announce themselves during pregnancy or via a tender lump or swelling.

In females, teratomas are usually discovered during the childbearing years. The terms, “mature cystic ovarian teratoma,” or “ovarian dermoid cyst” are used interchangeably to refer to this common ovarian neoplasm (abnormal growth). Usually, slow growing, they can cause pain if they rupture or twist in the ovaries. They can be detected by an ultrasound and removed by conventional surgery or laparoscopy (a type surgery that uses much smaller incisions).

Testicular teratomas account for two to six percent of all primary testicular tumors in males, and are generally diagnosed at about twenty months of age. By and large, pre-pubertal growths in males are not malignant, but post-pubertal presentation is more aggressive and has a higher rate of malignancy.

Sacrococcygeal teratomas can be found in both males and females and present in the coccyx (tailbone). Generally discovered in the fetus during pregnancy by a blood test or a sonogram, these tumors are usually not dangerous and can be dealt with after birth. While they can grow very large, those that consist mostly of fluid tend not to cause problems in utero. On the other hand, a tumor that is made up primarily of tissue may require more blood flow, which can endanger an unborn child because of the additional circulatory demands that are placed on the heart. This condition should be closely monitored and depending on severity, may require corrective surgery prior to birth.

Though teratomas are most often found in sex organs, they can grow anywhere. Recently, a twenty-six year-old woman from Indiana underwent surgery for a brain tumor that turned out to be a teratoma, complete with hair, bone and teeth. The brain is an exceedingly rare location for a teratoma, but not unheard of. Among brain tumors, three to five percent are germ cell tumors and just twenty percent of those are teratomas.

Prasad, Aarathi, “Teratomas:  the tumours that can transform into ‘evil twins’,“  April, 2015, theguardian.com

Rettner, Rachael, “Woman’s ‘Embryonic Twin’ Is Not Really an Embryo, Or a Twin,” April, 2015, https://www.livescience.com

“Teratoma of the ovary,” April, 2016, http://www.cancerresearchuk.org/