Home Topics Addiction The Dos and Don’ts of Snorting Cocaine 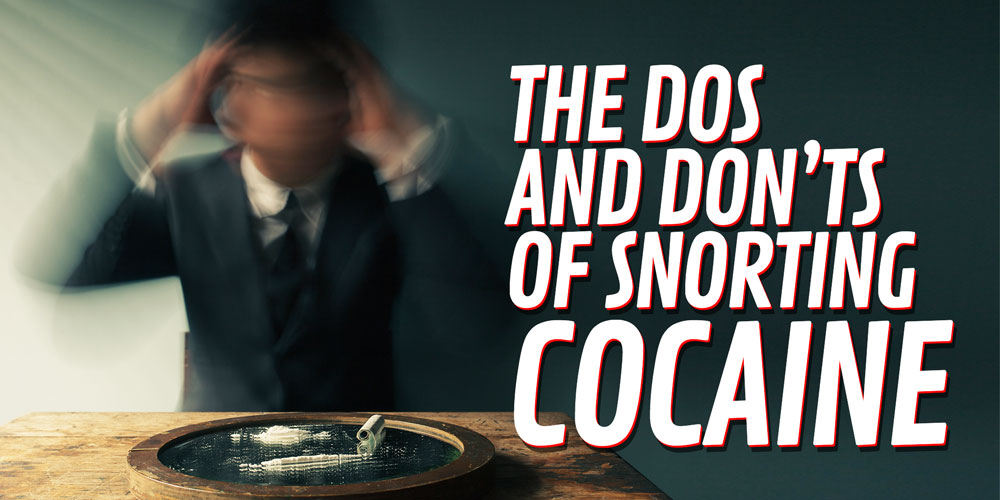 The Dos and Don’ts of Snorting Cocaine 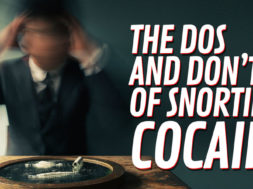 The Dos and Don’ts of Snorting Cocaine

Do:  Refrain from using cocaine.

Don’t:  Waver from this decision.

Cocaine is a highly addictive stimulant that can have negative effects on the user after just a single dose.  So potent is this substance that the brain’s addiction center can register a weeklong surge in activity after just one hit.  While it is classified as a Schedule II narcotic and has certain specific medical applications, cocaine is illegal for “recreational use” and its abuse often leads to tragic consequences.

Cocaine is produced from the leaves of the coca plant, which grows almost exclusively in certain parts of South America.  Typically made in jungle labs, the leaf goes through several processes to transform it into the familiar white powder that is sold to the end user.  For thousands of years, indigenous peoples chewed the leaves of the coca plant to improve everything from mood to digestion and, by the end of the nineteenth century, American drug companies were utilizing the substance for a variety of medicinal purposes.  This practice eventually revealed its addictive properties.  Cocaine experienced a resurgence in popularity in the 1970s when it was associated with “high status” because of its expense.  It was marketed as a drug that offered an enjoyable high, but came with “few side effects.”

Taken in a variety of ways, which include inhaling (smoking), intranasally (snorting), orally (eating) and intravenously (injecting), cocaine typically has an almost immediate effect, which is often described as euphoria.

The mesolimbic dopamine system is the portion of the brain that controls the reward center.  Things like food, sex and certain drugs stimulate it.  When the brain is functioning normally, many neurotransmitters, including dopamine, helps its cells to operate at appropriate activity levels in order to accomplish what we need to do.  The amount of dopamine that is expressed varies depending on the demand.  Dopamine is a chemical messenger that is released from neurons (brain cells) into the spaces (synapses) located between them.  Once in that space, it binds to proteins called dopamine receptors, where its “message” is conveyed before being removed from the synapse by dopamine transporters to be recycled for future use.

The methods by which cocaine is typically introduced into the body generally results in it entering the blood stream quickly.  The high is the byproduct of the cocaine’s is interference with the normal operation of the brain’s reward center.  Cocaine binds to the dopamine transporters that are responsible for removing dopamine from the synapse, thus preventing its removal.  The blockage of this process causes an accumulation of dopamine in the synapse, which results in an amplified signal that often manifests in the feelings of joy, and excitement.  Other parts of the brain, including the nucleus accumbens and the ventral tegmental area are also subject to the artificial build-up of dopamine, further hijacking the brain’s reward system.

These sensations are usually short term (five to ninety minutes), thereby requiring repeated doses to maintain.  Habitual use/abuse will eventually result in tolerance and dependence, demanding that the user take larger amounts more frequently to achieve the desired high.  Repeated use will begin to take a toll on the brain’s ability to function normally.   Sleep disorders, panic attacks, mood disorders, paranoia and psychosis are all possibilities.  Cognitive functions, decision-making processes, memory and motor skills can all be permanently impaired.  If snorted regularly, the nasal septum may be destroyed and lungs can be compromised.  If taken intravenously, the potential for blood borne infections like HIV and hepatitis increases dramatically.

Abuse can damage organs and a reduction of blood flow to the gastrointestinal tract can cause ulcerations and tears.  Cocaine can cause intra-cerebral hemorrhages and affect the heart in a variety of ways that are irreversible, if not deadly.  Heart rate and blood pressure can rise, increasing the possibility of medical emergencies that range from arrhythmia (irregular beat) to infarction (heart attack).

Nothing positive is going to come from an addiction to cocaine.  Though the immediate side effects of taking the drug may be enjoyable, the irony is that the end result of habitual use may be depression.

Barrie, Joshua, “This is What Cocaine Actually Does to Your Body – The Unseen Side Effects,” Mirror, November, 2016,
www.mirror.co.uk

Brodwin, Erin, “What Cocaine Does to Your Body and Brain,” Business Insider, May, 2016, businessinsider.com

Fox, Thomas Peter, et al, “The Destructive Capacity of Drug Abuse:  An Overview Exploring the Harmful Potential of Drug Abuse Both to the Individual and to Society,” Addiction, June, 2013, https://www.hindawi.com