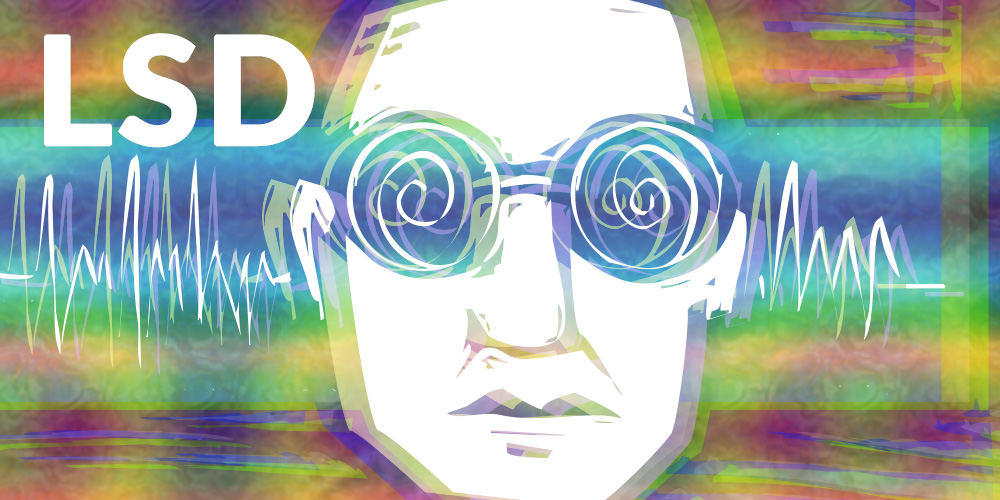 “To fathom hell or soar angelic, just take a pinch of psychedelic.”

The recent “life-hacking” practice of micro-dosing LSD using a “sub-perceptual” dose will not take one to the highs or lows described above.  On the other hand, the phrase “pinch of psychedelic” does not describe the large dosages used in experiments with LSD on patients in the 1950s or by the 60s youth culture led by Timothy Leary. In those days, doses of LSD were in the 250-500 microgram range.  The experience at this dosage is best characterized as a detachment from reality. A micro dose is usually just 10 micrograms.

Humphrey Osmund was an English psychiatrist doing research on therapeutic uses of LSD in the 1950s in Canada.  He gained notoriety when he administered mescaline to Aldous Huxley resulting in Huxley writing “The Doors of Perception” in 1954 (from whence the rock band “The Doors” derived their name).  In the late 1950s, Osmond developed what he called the psychedelic treatment model of alcoholism.  He used higher doses of LSD to achieve a temporary psychotic state of mind which he theorized permanently erased craving for alcohol.  He claimed a 50% cure rate.   This was called the psychedelic treatment model and never gained acceptance.  Interestingly, there was another LSD regimen based on using very low doses of LSD that was called the psycholytic model.  It was noted that at lower doses the psychotherapeutic process could be enhanced without the overt hallucinatory mind altering effects which occurred at higher dosages.

LSD was discovered quite accidentally by Swiss chemist Albert Hofmann while working at Sandoz pharmaceuticals in the 1930s. He was attempting to synthesize a chemical that would stimulate circulation and respiration.  He inadvertently absorbed a small amount through the skin of his fingertips and subsequently “sank into a not unpleasant intoxicated-like condition…I perceived an uninterrupted stream of fantastic pictures, extraordinary shapes with intense, kaleidoscopic play of colors.”  The date was April 19, 1943.  Three days later he intentionally ingested 250 micrograms and experienced an intense and initially harrowing psychedelic experience.  By the following morning the effects of the drug had abated but he described a residual state of what future “psychonauts” would describe as expanded consciousness.

“Everything glistened and sparkled in a fresh light.  The world was as if newly created.  All my senses vibrated in a condition of highest sensitivity.”

Hoffman “tripped” again over the next several decades 10-15 times.  In one of his last interviews before his death in 2008 he predicted that microdosing would become the most important area of research involving psychedelic drugs.  He based this on his experimentation on animals and on himself.  A fascinating anecdote involves Hofmann’s administering LSD to spiders!  He observed web construction at varying dosages.  “At low doses the webs were even better proportioned and more exactly built than normally.  However, with higher doses, the webs were badly and rudimentarily made.”

Fast forward to 2011when “The Psychedelic Explorer’s Guide” was published by James Fadiman, a psychologist and contemporary and friend of Timothy Leary and Ram Dass (Richard Alpert).  This book provides microdosing protocols using small (10 microgram) doses that allow sub-perceptual effects allegedly resulting in improved focus and decrease in anxiety and depression.

In the book “A Really Good Day: How Microdosing Made a Mega Difference in My Mood, My Marriage and My Life”, gifted New York Times best-selling author Ayelet Waldman recounts her own journey.  The book is more than a journal of her microdosing experience.  Chronicled within are the steps she took in researching and planning this therapeutic adventure.  She provides a balance of the risks and positive aspects of LSD macrodosing.  During her preparation and research, she became friends with James Fadiman and her book reflects the knowledge gained through this association.

Is there a downside to microdosing? The simple answer is we really don’t know.  Individuals with a personal or family history of schizophrenia or bipolar disorder should not engage in use of LSD at any dose.  What about long term effects?   Some say psychedelics are not addictive.  That’s a gray area for sure.  I’ve seen compulsive use of LSD.  No question that ketamine, MDMA and other drugs that are closely related are “addictive.”

Other issues are the possibility of criminal prosecution for buying or possessing LSD.  Purity and potency are always an issue as there is no pharmaceutical LSD available.

One of the problems in making statements about the dangers or benefits relates to the lack of controlled studies and basic research because of the criminal status of LSD.  The DEA placed LSD in the most restrictive category of drugs making it largely unavailable even to the scientific community for research or clinical trials. This must change.  There are currently states planning on “legalizing” certain psychedelics following the lead of marijuana reform.

The ability of hallucinogens such as LSD to interact with receptors for endogenous neurotransmitters such as GABA, serotonin and glutamate is significant.  LSD and other psychedelics can modulate activity in the Default Mode Network.  This is a distinct network of brain regions providing the neurologic basis for “self.”  Abnormal function in this network may be responsible for disorders such as autism, Alzheimer’s, PTSD, chronic pain and certain depressive disorders.   In addition to providing possible mechanisms explaining microdosing’s clinical actions in regulating mood, these findings point to important research possibilities.

In conclusion, as a physician I cannot recommend LSD at any dosage.  I am excited about the possibilities for further research and subsequent clinical trials.

As a parting anecdote, in researching the subject of microdosing LSD I decided to ask a few of my young adult patients in addiction recovery to share their thoughts.  Some responses: “Why waste good acid that way?” and “You take LSD to trip…right?” and “Some old guys must’ve come up with that idea.”

The neurobiology of psychedelic drugs: implications for the treatment of mood disorders

Ayahuasca dimethyltryptamine, and psychosis: a systematic review of human studies

“A Really Good Day: How Microdosing Made a Mega Difference in My Mood, My Marriage and My Life” Waldman, Ayelet: Knopf; New York 2017