Home Topics Body And Health Diaphoresis…Hidrosis…Sudor: ‘Tis the season to be sweaty! 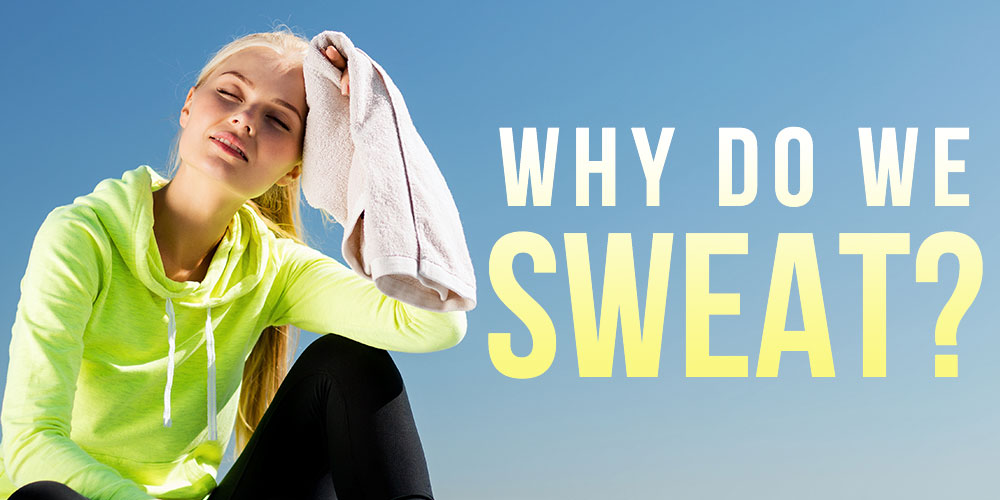 Diaphoresis…Hidrosis…Sudor: ‘Tis the season to be sweaty!

Diaphoresis…Hidrosis…Sudor: ‘Tis the season to be sweaty!

Whatever you call it, it all means sweat, and it is vitally important to our health. Perspiration is the body’s response to being overheated, and it is crucial to the maintenance of an appropriate core temperature. We sweat constantly, even when we are at rest, but certain conditions, such as climate, stress and exercise can trigger our bodies to produce larger amounts of it.

When you’re hot, anxious or exerting lots of physical energy, the hypothalamus (aka the brain’s thermostat) activates a process called “negative feedback,” that causes the body to respond in an effort to cool itself. It does this by sending a signal down the spinal cord that triggers the release of a chemical called acetylcholine which travels to nerves throughout your entire body. At this point, the four million (or so) sweat glands begin to filter fluid from the bloodstream in order to produce sweat. Located between the outer skin (epidermis) and the fat layer in areas called the dermis and the hypodermis, sweat glands are made up of a coiled secretory unit which leads to a duct that carries sweat to the skin’s surface. Sweat is released from the body via millions of pores, and its evaporation is the key to cooling the body. Once it has reached the skin’s surface, the warmer molecules turn to gas and evaporate more quickly, leaving the cooler fluid behind. The reason that a breeze is so refreshing when you’re sweating is because it speeds up this process.

Sweat is made up of water, fat, and electrolytes including sodium, potassium and calcium. It keeps our bodies and brains cool by using two different types of sweat glands. Eccrine glands make up the majority of sweat glands, and are located almost everywhere in the body, with high concentrations in the hands and soles of the feet. Enervated by the sympathetic nervous system, this type of sweat can produce a white salty residue, but generally only smells bad when it mixes with bacteria. For example, foul smelling feet are usually the result of sweat mixing with a bacteria called micrococcus sedentarius, which grows when feet are trapped in shoes all day.

Less prevalent, but equally as important are the apocrine glands, which are located in places like the armpits, nipples, ear canals and external genitalia. These glands expel a milky, oily fluid that contains fats and proteins and they develop during puberty, which is why body odor becomes apparent during the teenage years. Again, an unpleasant smell is the result of the sweat’s mixture with bacteria, in this case, staphylococcus hominis. “Stress sweat” is associated with these glands, and though it is not completely understood, it may be linked to the release of adrenaline that accompanies the “fight or flight” phenomenon. It may have evolved to serve as a odiferous warning signal.

The amount of sweat that one produces is linked to genetics, weight and overall fitness. People who are more physically fit tend to have higher muscle mass and greater blood volume; they sweat quicker and in greater amounts because their systems are running more efficiently.

Spicy foods (like garlic or peppers), and certain medical conditions such as diabetes, hypertension and menopause can increase sweat production, but there are also people who sweat excessively due to a condition called hyperhidrosis. This is perspiration that occurs when the body doesn’t need it and can cause embarrassment and interfere with everyday activities.

Sweat, normal or otherwise can be dealt with in a number of ways. Most people are able to swipe antiperspirant/deodorant on their armpits daily to deal with average amounts of perspiration. Antiperspirants contain aluminum, which blocks eccrine glands. They can be made even more effective if applied at night because, generally speaking, less sweat is produced during this part of the day, and glands can be blocked better and for longer under these conditions. Antiperspirants that contain higher amounts of aluminum can be bought over-the-counter and extra-strength prescriptions are available as well.

When these options are not enough, other methods can be explored. Sometimes, lasers are used to kill sweat glands. Another technique called iontophoresis, which uses water to conduct an electric current to the skin in an effort to block glands, can also be effective. In 2011, the FDA approved a non-invasive treatment called Miradry to treat conditions related to excessive sweating. Miradry uses electromagnetic energy to destroy sweat glands and is usually effective after two or three treatments. Thoracic sympathectomy is a procedure that can be used a last resort. It involves a surgical interruption of the nerves responsible for sweating. This method is very effective, but has some serious risks, including excessive sweating in other areas, and lung and nerve problems.

A healthy adult can produce up to one quart of sweat daily, which sounds like a lot, but the process is critical when it comes to staying cool. One more thing to keep in mind if you are a male…The scent of your sweat can be a determining factor when it comes to attracting a woman. One study showed that the average woman is more attracted to the smell of sweat from men whose genes are most unlike her own. The subtleties in this preference are actually beneficial to her offspring because it bodes well for the immune system.

Aldrich, Margaret, “Everything You Always Wanted to Know About Sweat,” April, 2015, https://experiencelife.com/

Doheny, Kathleen, “When You Sweat Too Much,” http://www.webmd.com/

Hansen, Juliann, “The Science of Sweat,” May, 2013, https://certification.acsm.org/blog/

“The Science Behind Sweating,” November 2013, https://theaggie.org/

“What is Hyperhidrosis?” http://www.webmd.com/

[templatera id=”4978″]
tags: Skin Sweat
previous Tumors With Hair And Teeth: What Are Teratomas and Germ Cell Tumors?
next This Life 89: Randy Couture